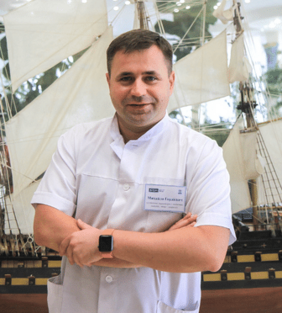 In 2000, he was admitted to General Medicine Department of the Danylo Halytsky Lviv National Medical University.

In 2008, he completed internship training in Lviv Regional Hospital specializing in Neurology.

Currently, he is a Deputy Director of Medical Affairs of Kozyavkin International Rehabilitation Clinic.

Corresponding Member of European and East European Academy of Childhood Disability since 2010.

Advising Research Assistant of the Institute of Medical Rehabilitation Problems since 2014.

Author of publications. Participant of Ukrainian and international conferences and conventions.

Engaged in cooperation with Karolinska Institute (Sweden) with regard to estimation of cerebral palsy severity according to international rating scales (GMFCS), as well as scientific and evidentiary basis of Intensive Neurophysiological Rehabilitation System efficiency.