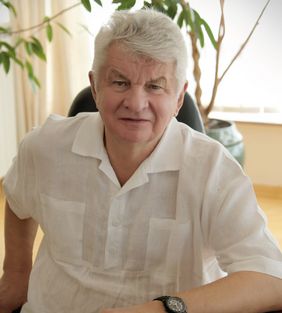 Volodymyr Kozyavkin is the author of fundamentally new technology for patients with cerebral palsy – the Intensive Neurophysiological Rehabilitation System, known worldwide as the Professor Kozyavkin Method. This rehabilitation system has been officially acknowledged in Ukraine and thanks to its effectiveness, has gained wide international recognition.

By stimulating compensatory abilities in the child's body and activating the plasticity of the brain, this system creates a new functional state in the child’s body, which opens up greater opportunities for the child to develop its motor and mental capacities more rapidly. More than 70,000 patients from 68 countries have been treated by this system, whose results have proved to be stable and positive. In the encyclopedia edition of Children's Orthopedics, edited by Prof. Nithard, the Professor Kozyavkin Method is ranked among the 4 most effective methods for providing conservative treatments to patients with cerebral palsy.

Volodymyr Kozyavkin is a renowned scientist and researcher, and a specialist in neurology and rehabilitation. Created under his management, the Truskavets school of rehabilitation is famous not only in Ukraine but also in many other countries. He has written over 150 articles and seven books. He also leads a research team, which is closely associated with the treatment process and is focused on the creative development of and improvements in the actual rehabilitation system.

Under his management, we developed a new approach to training human movements and correcting movement patterns using the Spiral movement correction suit.

To improve the performance of motor function exercises, we developed specialized rehabilitation computer games, which significantly heighten the patient’s motivation to take an active part in rehabilitation processes.

To carry out a detailed study of the characteristics of the patient’s movement biomechanics, we developed a telemetric system to analyze movements, which enables the therapist to simultaneously measure movements in many limb joints at a certain distance.

Under his management, we developed and introduced the electronic medical record, which stores data and produces a quick analysis of all the information concerning the patient’s condition; it also contains a program monitoring changes in the patient’s status during the treatment course at the Kozyavkin International Rehabilitation Clinic.

Research studies at the clinic are conducted in close collaboration with the Shupik Medical Academy of Postgraduate Education in Kyiv, the Ukrainian Research Institute of Clinical and Experimental Neurology and Psychiatry, the Lviv National Medical University, the Munich Children’s Center, the Karolinska Institute, etc. One of the most pressing tasks is to organize, together with other reputed medical institutions, random clinical tests concerning the performance of the treatment system using the Professor Kozyavkin Method in compliance with standards of conclusive medicine.

The Intensive Neurophysiological Rehabilitation System has been presented at many national and international congresses and conferences, including those organized by the European Academy of Childhood Disability, the International Child Neurology Association, the American Congress of Rehabilitation Medicine, the European Federation of Neurological Societies, and many others.

In March 2009, the Ukrainian rehabilitation system was discussed at the International Conference on the Social Adaptation of the Disabled, held at the headquarters of the European Parliament in Brussels. This conference took place under the patronage of Mr Marek Siwiec, the Vice-President of the European Parliament, who personally invited Professor Kozyavkin to present the Ukrainian intensive rehabilitation technology.

In 1999, he was appointed professor of Medical Rehabilitation, Health Sciences and Wellness at the P.L. Shupik National Medical Academy of Postgraduate Education.

Prof. Kozyavkin’s scientific and practical activities have earned him many awards. In 1994, he was awarded the honorary title – Honored Scientist and Technician of Ukraine.

In 1999, he received an Honorary Diploma, naming him Laureate of the State Award of Ukraine in Science and Technology for his series of scientific papers – Organic Lesions of the Nervous System in Children. Development and Practical Implementation of New Methods for Diagnosis, Treatment, Prevention, Rehabilitation, and Social Adaptation.

In August 2001, by decree of the President of Ukraine, Professor Volodymyr Kozyavkin was awarded the title – Hero of Ukraine – and received the Order of the State for outstanding personal services to the Ukrainian State in the development of medical sciences, the development of innovative treatment methods, and the rehabilitation of patients suffering from organic lesions of the nervous system.

Prof. Kozyavkin was also awarded the Order of the National Foundation – " Ukraine for Children” – and the Medal of the Bavarian State Ministry of Labor and Social Order – " For merits in helping children with limited abilities”. In 2006, he was awarded the Order of Yaroslav the Wise (V category), and in December 2009 he received the Honorary Diploma of the Cabinet of Ministers of Ukraine.

Сorresponding member of the National Academy of Medical Sciences of Ukraine, he was elected 28.12.2011 on speciality neurorehabilitology.